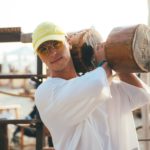 Today we’d like to introduce you to Joslyn Rose Lyons.

Early on in my career I was given a director’s seat at Simmons Lathan Media Group, where I directed HBO Def Poetry for mobile platforms, with my long-time collaborator Rafael Casal. I’ve always had a passion for music and exploring the creative process, so it was a natural progression for me to produce shows for BET, including Rap City with Wu-Tang Clan, I produced and directed the first Music Matters Grammy Showcase at Creative Artists Agency (CAA) with PJ Morton, Mack Wilds, Mali Music, produced segments for The Message, a four-part documentary on the history of hip hop, and I produced the BET Awards Celebrity Basketball Game with Nick Cannon, Chris Brown, The Game, Victor Oladipo, Jemele Hill, Fat Joe, Angela Yee, Trevor Jackson, and Lil Rey Howery. My work in music television led me to directing a number of music videos, which included Talib Kweli’s Cold Rain which was #1 music video on MTV.com, The Majors featuring prince Ali (aka Mahershala Ali), which premiered on BET, Chad Hugo (N.E.R.D./Neptunes), Too $hort, E-40 and I directed a viral video campaign for Mali Music on his ‘what it means to be beautiful’ featuring Brely Evans, and Wendy Raquel Robinson. My first short film starred Academy Award-winning actor Mahershala Ali and won at the Link TV: One Nation, Many Voices Muslim American Film Competition, and I directed a short doc for Academy Award-winning actor/rapper Common and his Imagine Justice organization.

Pressure makes the diamond, friction forms the pearl. So it’s all needed in order to make great work. Having a great crew is key, I’m grateful to work with amazing talent. I have a great creative team, we have chemistry and they are artists, from my Oakland film family and longtime collaborators such as Rafael Casal, Boots Riley and Hilton Day, to my creative partners Matt Barnes, Ray Young and Jelani McCoy at our company Mediathirtyfour.com, we all work together on the vision. Jallal Malik, one of the lead actors in my recent short film Looking Glass (which premiered at Sundance London and won Best Female Director at TopShorts) shared his thoughts about working together: “Joslyn is just amazing with creative directing and understanding what she wants. She’s a strong woman who has rawness in this industry and has a strong hold on knowing what she wants. That’s needed to be a great director and what separates you from being great to being next. I’ve always seen her as being next. I met Joslyn Rose out here in San Francisco with my idols – my mentor, and my friend Mos Def. You definitely gotta give it up to the greats – Oakland is a city of music and political strife and people understanding what they want.”

My short film Looking Glass features an ensemble cast of artists Jallal Malik, DJ Umami, Ryan Nicole-Peters, and DJ Ambush, and embraces the struggle to overcome complacency while visually embodying the spirit of Oakland’s creative community. At the time of conceptualizing this piece, I had just finished reading a book called The Big Leap which explores the concept of taking that courageous leap from your ‘excellence zone’ to your ‘genius zone’ so this was a concept also present when I wrote the short. I have always been fascinated by the idea of time. Looking Glass was in some ways my love letter to time. I am inspired by the intersection of art and social justice. I created a show with my creative partner Matt Barnes for UNINTERRUPTED Same Energy. The series featured Matt Barnes, Marshawn Lynch and 2Chainz and explored in-depth conversations about mental, physical, and spiritual strength it takes to pursue your dreams. I’m a Producer on several hip hop and social justice docs, most recently Speaking Truth to Power, featuring Rep. Barbara Lee, Danny Glover, Corey Booker, Van Jones, Alice Walker, and Alexandria Ocasio-Cortez. I want my work to create that spark, to seek that light. Creating allows me to let my imagination run free like a wild horse, and in that process I find a sense of freedom. I think we are drawn to things that allow us to feel freedom. For me, that’s what directing and creating does, it gives me a sense of freedom.

Keep believing in your vision. Keep working on it, every day. Even the smallest sparks can ignite something great. No amount of light is too small to illuminate the path ahead. More than anything, do what brings you joy, and keep seeking that light.

Success is alignment, to me success is aligning with that lights you up, gives you a sense of joy, purpose. Cinema speaks that universal language, it surpasses time and just like music, cinema makes you feel things. To me, the job of a great storyteller, or artist of any kind, is to help us feel something. Even if it’s just remembering what it’s like to feel, or getting us in touch with a thought, or an emotion that is maybe uncomfortable, or unfamiliar. I have always been drawn to expressing myself in the language of cinema.

I finished a script for my first feature recently, I’m working on a few shows in different phases of production and development. Directing commercials. I would always hope that what ever is next is rooted in more growth, more creation, more alignment and more light.