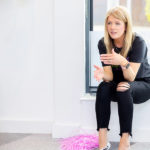 The “Connected with Wayno,” series at Amazon Music is beginning to take shape, with the series bringing on board Kevin Eugee Wilson as showrunner.

It has been confirmed that Kevin Eugee Wilson is now attached to serve as showrunner on the all new digital hip-hop phenomenon.

Kevin Eugee Wilson is best known for his work as co-creator, executive producer and showrunner of the stand-up comedy series “Laugh Tonight with Damon Williams,” and producing on many award and live television shows. From producing on “What the Fit,” with Kevin Hart, to producing the BET Awards red carpet, and working with Ryan Murphy, Eugee surely has the experience and resume any seasoned producer would clamor to have.

“Connected with Wayno” kicked off last summer and is a live show that connects the dots between ideas, people, and music through stories told by high profile artist and innovators at the forefront of Hip-Hop and R&B.  “Connected with Wayno,” has proven incredibly popular throughout it’s run and have been met with positive reviews by both critics and fans of its core demographic.

Showrunners have to be incredible multitaskers to take on the Herculean feat of running just one television show. Those who juggle two or three at the same time are arguably, gluttons for punishment or just simply crazy. Like Eugee, most Showrunners have multiple projects going at once.

The music competition reality show is in the pre-production stages. In this new music reality competition show “you will be amazed at what we have up our sleeves” says Eugee. “It’s one of the most exciting projects on our roster at the moment and we have some amazing shows on the current roster.”

If shows are children, then Kevin Eugee Wilson is the proud father of triplets: “Connected with Wayno,” the new upcoming music competition reality show, title still pending, and the upcoming cooking show “Chef Nadege’s Kitchen” partnering with Ebony Ent. and ReachTV, slated to soon be airing throughout the country. Eugee approaches his show-juggling act as he does his family. “You just have to take it day-by-day, one step at a time, putting out one fire at a time.” But once you have worked with and gotten into a steady groove with your team, it then often feels like the product of a sturdy and well-oiled machine. Eugee recognizes the impossibility of micromanaging every detail of numerous shows and believes that building a strong team and having trust and faith in them is key.

“Once you start to trust who you’ve brought on as your team, you start to let go, and believe you’ve got the right people for the gig, and know they are going to give what is needed to be given” he says.