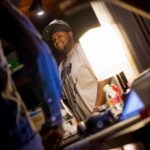 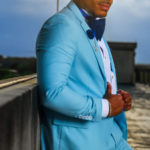 Today we’d like to introduce you to Vics Vibes.

My name is Vic Hardison, but virtually I’m known as Vics Vibes. I’m the Founder and CEO of Digitally Hustlin, a digital media platform providing expertise in both the creator economy and web 3 space. As the youngest of five kids, I grew up on the southside of Atlanta between College Park and Clayton County. Starting as early as Middle School, landing leadership roles and finding myself in environments that were both collaborative and competitive would prove to be a recurring theme in my life. I managed to graduate in the top 5% of my class as a multi-sport letterman; while designing 4 apparel collections for the football team, while also making highlight tapes for student athletes on the Southside. I got to display that same tenacity again in my college years as a student athlete; studying Electrical Engineering by day, and playing Division-I quarterback by night. My passion for extracurriculars even led to me winning the title of best new actor in the local “August Wilson” play.
The same traits that helped me thrive growing up on Old National would show again as I graduated from college and became the lead engineer at Hartsfield-Jackson International. This became a full circle moment for a young black kid, who grew up in one of Atlanta’s most dangerous neighborhoods throughout the 90s and early 2000s to leading the largest grossing project at Hartsfield-Jackson, inking my initials as one of 2 people on the blueprints of the world’s largest airport.

I’d have to say one of the challenges I faced came at a pivotal time during my college career, which in retrospect has driven my career path today to bring augmented reality and digital education to the masses. So initially I attended Savannah State University where I took an Electronics class my sophomore year. As we all do, I Googled what to expect from this class, and it stated we would learn the basics of all technology devices and how to harness to power of electricity — something all successful Engineers seemed to possess. To my sheer disappointment, I showed up to our very first lab and my 4 ft 11 professor took out a board the size of a textbook with electrical components the size of starbursts and told all 25 of us to come stand around as he demonstrated the day’s lesson. As I stood 3 rows back with my 15/20 vision, I knew that if I wanted to compete as a professional engineer, this would not supplement my specific learning style. I’m such a Hands-On learner, that I felt I was putting my future in Jeopardy being in this scenario. That caused me to leave behind my full-ride scholarship and my beloved HBCU environment to pick up the financial burden of pursuing a degree from a university with funding that allotted a more immersive experience. It was a very difficult transition as my identity was hugely tied to me being a student-athlete.

Currently, I’m able to serve corporations and brands in two capacities; both of which I’m able to leverage my combined skills and decrees I’ve acquired as a result of attacking digital media through technology. Primarily, I help create and curate educational content based on the client’s niche. Services include structuring the outline/curriculum, scripting assistance and assistance with the entire video production pipeline fromcamera gear to backend of editing and production. With my added specialization of the Web 3 ecosystem, blockchain technology and Augmented/Virtual Reality technologies, I am able to specifically help onboard and coordinate programs, curriculums and marketing for corporations looking to perform in the next evolution of the internet and digital media. I recently served as the Senior Developer for a corporation, where I led a production pipeline that produced tons of both video and physical material for their company to onboard thousands of people into Web 3 and Mixed Reality space. I’ve become an expert in these spaces because I’ve been an active pioneer in both ecosystems for the last decade and have proven my ability to reach the highest levels of honor in every arena. I am also working with Fan Controlled Sports and Entertainment as a Digital Media Stategist, as we take this Web 3 tech startup to a multi-billion dollar evaluation. I will be integrating the Web 3 strategy and community engagement through several digital platforms.

There’s power in two things that we all posses, that cost nothing but could cost us everything. There’s power in a pivot and ther’s power in perspective. Life by definition is supposed to continuously grow and evolve, yet often time people find themselves in routine and stagnation. A properly timed pivot can revitalize energy and ideas that may have previously gone dormant, but can catapult you into a season of overflowing wins. I’ve experienced this countless times and looking back in gratitude, because I was able to see what would have resulted if I let fear hold me back. The other principle to prioritize is your perspective. I can give an entire TedTalk on how much of an important role your perspective has to do with our daily reality. “When we begin to change the way we look at things, the things we look at change,” Wayne Dyer. At a very fundamental level, we can observe this principle in real-time by looking at an optical illusion. Initially our eyes see one thing, and our mind agrees. It agrees so much that it’s often impossible to see any other variations in the photo. Yet the moment someone reveals a new perspective, it can be hard to see the initial photo at all. It’s because our mind is like a balloon and once it expands its impossible to retract.

Success at this point in my life is a reflection of self-fulfillment. There are external wins of course– the trophies, the certificates, the plaques, the acholades… But when the ceremony is over, and the IG story expires, you’re left with a moment filled you, your thoughts, and your spirit. To me self-fulfillment can be measured by how concentrated those three aspects are at the end of the night. Not necessarily concentrated as in your level of focus, but more so how aligned those 3 truly are. From mind, Body, and Spirit, what level of grace and love are you showing yourself in comparison to judgment or poor self-talk? To be successful is to walk a path that allows you to comfortably align those three aspects on a daily basis. We often go through periods of sacrifice in two or more of these three elements. I believe to not upholding the enemy of the 3, induces a softer Foundation for anything you may be building at that moment.

I recently received a phone call from the Football Operations Manager for Atlanta-based Fan Controlled Sports and Entertainment, David Handler. He called midday mentioning he was sitting with one of the company’s Co-Founders and wanted to invite me out to a showcase for the up-and-coming basketball league. This turned into an extremely exciting experience where I was able to lay first eyes on their brand new one-of-a-kind LED Basketball court with fully integrated ball and player tracking. After several conversations with the C-Suite Level executives and League Commissioner, they felt that with the combination of playing Atlanta sports for 15+ years, an engineering degree, my previous Web 3 corporate project and finally content creation and strategy, I would be the perfect fit to develop the digital media strategy. This is an exciting role as it is a culmination of the core things that make up who I am. This becomes the largest company for Digitally Hustlin to service, with an extremely solid game plan already in the works!
I was selected as 1 of 10 creators around the world as a creator within the CreatorDAO ecosystem, funded by Andreesen Horwitz (a16z) and Paris Hilton. I am looking to continue learning from the mentorship provided by this cohort and use funding for the development of our initiative to bring Augmented Reality and digital education to the school system and the masses at large.

First I would like to thank everyone for reading through this interview and taking in my perspective. If you would like to connect in the future, rather it be for 1-on-1 on consulting or some level of corporate coordination, please feel free to reach out!

There are three ways we can connect and stay in contact directly and virtually! Homebase will be digitallyhustlin.com, from here you will be able to branch off and find the different levels of the brand and what is offered. Secondly, for a direct means of communication, you can email info@vicsvibes.com. This e-mail will be monitored by my team so a timely response will be delivered. Lastly one of the best ways to be sure to reach me directly is on social media via Instagram and LinkedIN. My name on instagram is @vics.vibes, in which you will find @digitallyhustlin in the bio. And on LinkedIN, you’re able to find me at Vics Vibes. Be sure to follow and connect as I am always looking to serve! The DH Experience will be a huge event coming in 2023, that you will NOT want to miss!