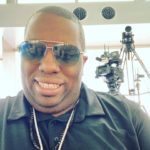 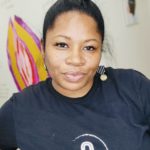 Today we’d like to introduce you to Ebony L Kenney.

I’m honored too. So, it’s mutual. And thank you so much for the chance to speak with you. I’ve been talking a lot lately. I just finished doing a panel with the American Institute of Graphic Arts (AIGA), Baltimore about an exhibit a colleague was being featured in called Likely Stories. Very riveting conversation. As well, I have an exhibit up right now at Stevenson University. The exhibit is called Creative Research Practices, with my addition being Safe Third Spaces. If we’re going to build a hybrid space between worlds, generations and realities, let it be inclusive and affirming. This is a really transitional time for me in that I’ve spent some time thinking it was someone else’s turn to leave an impact, step forward and shine. Even though I did an AIGA panel called Color Blind in 2009, which is the hint that if you don’t catch the momentum, it won’t catch on its own. In the movies it all happens at once, you know, and we get to thinking that’s how it happens in real life, without any help or even for some cooperation from ourselves. So if I were to say “how did I get here” I would say that I was that child someone whispered to and said “you’re special” and then everyone around kinda agreed with it. And I feel blessed for that even though there were plenty of other narratives I could have grabbed onto, but I didn’t, that I chose the truth that.

From my history I’ve had plenty of hardships. And yet, someone has had it worse than me. But before I skip to the self-encouragement stage I’ll share some of what I went through. They say when we tell stories, we speak from where we are instead of where we’ve been. I can remember walking through campus in undergrad crying because my dream was shattering and I wondered if hardship meant I should persist or take the hint and quit. I had made it to college thinking I would be a doctor, so biology/pre-med was my track, and I was faced with the challenge of that coursework and worse thinking it could have been coming easier to me and for a long time I let that disappointment define me. I later even got myself a diagnosis of Adult ADD to back up my narrative. I only realized my gift for hearing people after the BA in English and the MA in Publication Design. I worked the entire time I was in school and perfected the listening skill standing out front of a WAWA at 7 o’clock in the morning asking for 2 minutes in exchange for 50 cents off a coffee, knowing I had at least a 15 minute, 75 question survey in my hand. I recently had a loss that forced me to access God as a means of self-inducing the unconditional love and acceptance I had spent a lot of time trying to get people to provide.

At heart, I’m a creative scientist. I embraced questions early on and currently my career is the most congruent it has ever been. As a Usability Analyst and Designer for a large agency, I get to do the multiple angle, deep dive research that I crave, and then come back and immediately apply it in a design. That’s why when I was asked to be part of the Creative Research Practices exhibit at Stevenson University, it was so easy to take a proven process and overlay a mission trip to Rwanda to convey the road from Empathy to Equity. I enjoyed being able to convey an honest awakened perspective since our society vacillates between political correctness and buck against censorship. One side is asking for open-mindedness, or at least enlightened speech that acknowledges their human experience. The other shouting, “You can’t control me!” There’s this resistance to coming through an experience with a shifted view. As someone determined to defy the odds, I’m often met with that instinct in people. They need their initial view of me and whatever I represent to them, to be perpetually true. What we miss in allowing otherness is the personal transformation that happens on the road from empathy to equity. If empathy acknowledges another reality, equity values it. And it takes collective and coordinated small steps to expand society to that model. That’s what’s behind my work.

The definition of success matches with what they have prioritized as values. In many conversations with fellow females, it’s our bodies. We prioritize our image often, and there’s no place to list it under accomplishments so we feel unaccomplished at the thing we’ve spent much energy trying to obtain. And so then finding success is like finding your other favorite shoe in the closet. You know it’s there, but it’s okay if you don’t put your hand on it, until it’s absolutely time to. In reality, this elusive success you’re seeking is autonomy, mastery and purpose, maybe at first for yourself and then for the world. And you get there by seeing another human being and instead of mirroring as an attempt to hack intimacy, you really saw them distinctly, which helped you see yourself distinctly. Consequently, that’s how you’re going to move from empathy to equity. Like hidden train stops, there is something beyond thinking about others and their trials with empathy, there’s the revelation of how you move from that place shifted perspective in a way that addresses a core shared need.

I put myself on the program I mentioned above. I had to realize what was important to me as evidenced by choices I’d made and not this idea in my mind that’s well influenced by society and flat. So my evolving definition of success has to do with strengthening myself spiritually, making sure this message makes it to as many people as possible, and hearing others stories allowing them to change me. I feel like the good version of Maxwell Lord in Wonder Woman who learned what people knew by granting their wishes in a pursuit of personal enhancement. Ego mastery and acknowledgement are up there as well. This year, having my work featured in an exhibit helped me explore these themes as they were demonstrated by a mission trip to East Africa, during which I saw the only mission was to see the shared humanity in the Rwandians that I encountered. See their history, their present, and where our trajectories have converged.

I’m planning a series of interviews on healing by those that have overcome major injustices. Rwandians from a genocide, South Africans from apartheid and partnering with Florida State University and Stevenson University to explore the criminal justice system regarding re-entry as it relates to the victims family, and the returning citizens family, with the premise that the effort could reduce recidivism. This inquiry could inform the modern conversations around the questions being asked with Critical Race Theory around re-imagining history without destroying advancements in unification established by the Civil Rights movement. I’m also promoting a written design project called “I Humbly Submit” which guides readers through 28 affirmations of belongingness.

They can check out my website at ebonylkenney.com or follow me on IG at lyricallye. Feel free to reach out to continue the conversation into my inquiries.

Autism Activist Marcus Boyd Has Something To Say