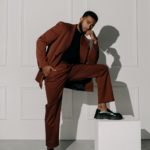 Today we’d like to introduce you to Robert Springer.

My name is Robert Springer Jr. I am a Morehead State Eagles’ football player originally from Little Rock, Arkansas. Prior to this past Fall, I was a student-athlete at the University of Central Arkansas (2019-2021). I graduated high school from Little Rock Christian Academy. In 2018, I won a state championship and was ranked 37th in Arkansas and in the top 350 nationally among cornerbacks by 24/7 Sports. I got here by putting in a lot of effort and making sacrifices. My heritage has shaped me into the person I am today. Worthie Springer Jr., my grandfather, was “one of Little Rock’s premier black physicians,” and he instilled in me a work ethic that has shaped me into the person I am today. A desire to appear in front of the camera, along with an eye for fashion, was the seed that grew into my NIL success story. I got my start in photography working with the now-famous “GloJays” photographer of tiktok. When I was 15 years old, I was one of his first shots, and from there, his career and mine went off. We did shoots together for three years before he relocated to Atlanta. My popularity developed from there, and I began to attract the attention of huge corporations. My largest partnerships came up once NIL proved useful to athletes, and they include companies like GLD store, Mnml.LA, and CurlDaze. Later on, I became partnered with the Q Collar, a product worn by several NFL players.

I’ve always had a passion for football, but I wasn’t the greatest player when I was younger. When I first started coming to practice, I rarely participated and instead just watched. Saddening, really, to learn that my dad had made it into the Juco basketball hall of fame. Since he had dedicated so much of his life to sports, seeing that his kid wasn’t talented in the area made him feel unease. During the offseason leading up to my ninth grade football season, I developed a deep and abiding passion for the game. I wanted to succeed because I wanted to make my dad happy and proud of me. My realization that I wasn’t better than the person in front of me made me realize that I needed to work every day to improve my skill set if I ever wanted to achieve my goal. People who didn’t believe in me or my abilities would advise me to give up, but it simply made me more motivated to show them they were wrong. The attitude and preparedness for competition, wherever it may be held, is something I greatly admire.

Early on, I was at the bottom of the totem pole, but I quickly rose to the top and finally got to play. In ninth grade, I participated in the last five games of the season. I had 25 tackles, 4 interceptions (2 returned for touchdowns), 2 fumble recoveries, 2 forced fumbles, and 4 pass deflections in those 5 games. After that year, my anticipation grew even more. After that, I worked my way up to a starting position on the varsity football team, became team captain, and was awarded a multitude of scholarships.

I am a photographer, Division I football starter, brand ambassador, model for high-end companies, commercial actor (for Ticket Smarter), and former media face of the University of Central Arkansas Bears football team. On Instagram, I am followed by almost 12,000 people.

My brother! It was 2012 I believe, one day in the Fall when my mother and brother went to the Optometrist. My brother was 14 years old. He was like any other child, loved to play video games and watch tv, but gradually in the span of three months his sight began to minimize. He first discovered he was losing his eyesight when he failed the eye cover test. He wasn’t doing as well as he used to do. He used to be able to see fonts up to 34, but he could barely see the font that was 48. As time went on, he noticed that he wasn’t able to see colors as clearly as he did before. Then one day he saw nothing but an overwhelming white light and it changed everything. His site was basically gone after this point. He was no longer able to distinguish between the light being on or off and he would sadly take showers in the dark without knowing it. His name is Worthie Springer.

In life we as humans go through many hardships when we never think it will happen. When hard times come we tend to attack our hardships differently than taking it on. To even think about never being able to see for the rest of your life is harsh. To know never a day in your life will you be able to do something by yourself. Although, Worthie did know this and he made sure his disability wasn’t going to stop him. My brother Worthie did not let his disability stop him, he knew God had a plan for him. God was testing my brother’s heart, to show Worthie who he really is. God began using my brother through his disability, bringing Worthie closer to him.

While everyone has the same aspiration, they may have very diverse ideas about what it means to really achieve that goal. Success can be defined in a variety of ways: through recognition, financial gain, or the realization of an aspiration. In my eyes, a successful endeavor is one in which I am able to fulfill a lifelong ambition. For me, success is being there for someone else when they need it. I aspire to take on the role of a hero because I believe that heroes are bound by a duty to aid the helpless. If I am able to assist individuals who are in need of money, basic survival necessities, or even if I am able to save the life of another person, then I will consider myself to have been successful. For me, just the fact that I have the good intention of assisting others in need is already a victory.

The next step for me is to go on with the expansion of my NIL stock. Forming partnerships with an increasing number of companies and achieving growing levels of success in the commercial aspect of our work. In addition to furthering my football career and acquiring more accoloades, I want to get a master’s degree in psychology. I want to work as a sports psychologist at a prestigious university, during which time I will assist other people with their behavioral health challenges and anything else that they struggle with in relation to their mental health concerns. I want to be able to rent out real estate properties and homes, as well as make investments in real estate. For the people of my hometown of Little Rock, Arkansas, I plan to build a sports complex complete with an indoor turf field and a weight room that offers classes tailored to different age groups. In addition, I hope to develop as a model and secure more high-profile collaborations and sponsorships in the future.

Follow me on Instagram at @rob.blessed to get in touch with me, or you can click on the link to my link tree below. Contact 142@gmail.com or brandon@mogl.online for any business or marketing inquiries relating to NIL.

Antoine Taylor; Water for the World