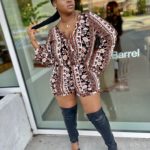 Today I’d like to highlight the career of the ambitious and driven Valeria Rubino, a video journalist, producer, editor, camerawoman, and founder of ViaggioSport (VSport). With an impressive track record and a solid resume, Valeria is a driving force in the broadcasting/media industry. Valeria was raised in Naples, where she got her BA in Political Sciences and her first Master’s in Parliamentary Law. She even obtained a second Master’s degree in Broadcast Journalism from the University of Miami

As a former long-distance swimmer with Team Italy, it’s no wonder she grew to have a passion for sports. “I [love] every bit of it, including the squeaking of sneakers on the court and the entertainment world behind the game.”

With a passion for covering sports, she holds the title of C&O, editor, and host for VSport. To date, she is the only Italian to have ever interviewed all the big NBA stars one-on-one. Among them, her favorite to interview was Kobe Bryant. An incredible and honorable feat on its own. Her article on Kobe is enlightening and full of passion that any die-hard Kobe fan may find interesting with personal tidbits most may not have known about Bryant. She explains, “Kobe Bryant loved to be interviewed by me and always wanted interviews in Italian with me. If I didn’t ask him questions he’d ask me in Italian: ‘No questions today?’”

You can read the Kobe article here.

Her accomplishments are impressive to say the least. She started from nothing and grew into the industry star she is without the backing and support of big networks that many others are fortunate to have. She is (or has been) a collaborator with many media networks including: Corriere della Sera, Il Roma, Itality, RT France, La Sexta, l’Equipe TV, ESPN, TNT, Sun Sports, Telemundo, LaPresse, etc. She has also worked with Netflix on the show “First Team: Juventus” and IMG as a Production Coordinator and translator for 5 languages.

Currently, she  mostly works as producer and technical director for the Italian television RAI. Following her passion of sports coverage and travel, she continues to contribute to ViaggioSport. She can be found on the following platforms: